“A trillion here, a trillion there, and pretty soon you’re talking about real money!”

who was talking about “billions”, not trillions)

These pieces have tried to be interesting and provocative, not the usual “market re-cap” material that can be found in so many places.   We are also careful about making forecasts, often citing Physicist Neils Bohr’s aphorism that “prediction is difficult, especially about the future.”  That said, we have made the case for persistent low (and lower) interest rates for years now and that continues to be the case.  However, if we’ll take credit where it is due, we have to take our lumps also! 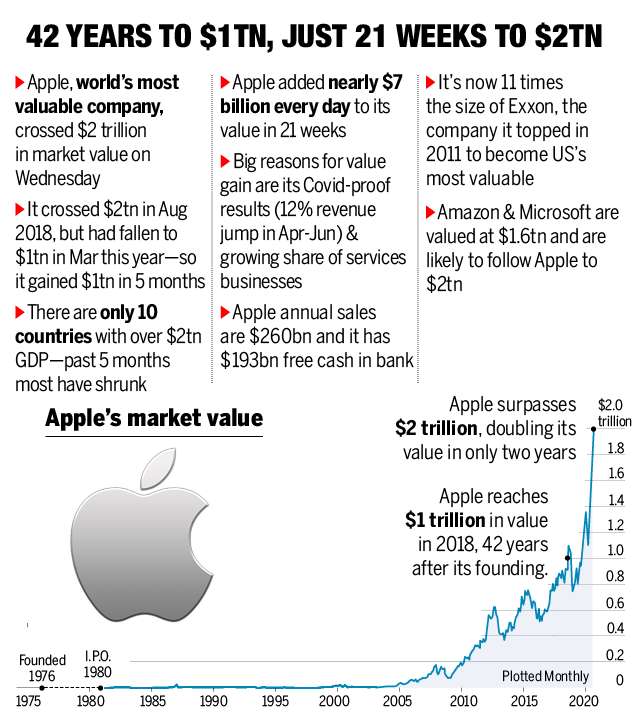 “As I write this, Apple stock (AAPL) is hovering around $186/share.  Given the number of Apple shares outstanding, a price of about $195 will make Apple the first company ever to have a market capitalization (share price times number of shares) of $1 trillion.  Barring a significant market drop, they will likely hit the mark soon, though we should remember Microsoft’s “inevitable” climb to a trillion dollar valuation was suddenly interrupted by the dot-com-bust bear market in early 2000, the stock losing two-thirds of its value and not recovering for 17 years!  Anyway, good for Apple, or at least their shareholders!   It used to be said that you could get rich by selling everyone in the country something for a dollar.  Apple has greatly expanded on this notion by (seemingly) selling everyone in the world something that costs hundreds of dollars!   As we have pointed out before, the valuation is also due in some (unknown) part to the lack of new high-quality publicly-traded companies, but that’s a topic for another day.  The question is, where Apple can go from here?

We learn early on to compare growth rates and returns in percentages rather than absolute amounts.  After all, a stock that goes from 100 to 103 has grown “less” than a stock that goes from 50 to 52.  However, when we are talking about huge base numbers, the absolute change becomes important to consider.  Apple growing another 10% represents additional capitalization of $100 billion, a number that is itself larger than the total capitalization of all but a handful of companies.  Ten years ago (at the end of May 2008), Apple was trading for $27.  Its current price represents growth of 21% per year since then.   If it grows at that rate for 10 more years, its capitalization would be almost $7 trillion dollars.  Even growth of 10% per year would lead to a capitalization of $2.6 trillion in a decade, over 1.5 times bigger than it is now.   Where can a marginal addition of $1.6 trillion of value come from?  Apple has sold 1.2 billion iPhones in the past decade.  With new competition and market saturation it’s hard to believe they can repeat, let alone increase, that number.  Cloud computing and storage and other products can fill some of the gap, but it’s a big gap.  Such size, particularly when it’s predicated on such a narrow product base, is a barrier unto itself.”

Well, here it is a mere 26 months later and Apple (at a price of $490/share) reached an intra-day high of a $2 trillion market cap this week.  Whoops!   Amazon and Tesla have also experienced amazing run-ups this year.  Time to bail out now?  Who knows?   One is never sure something is a “bubble” until it’s over, but some of history’s lessons in this regard are sharp.   Below is the price chart of Viavi Solutions (once known as JDS Uniphase): 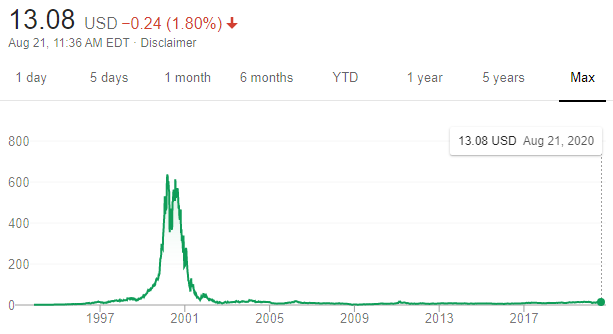 U.S. Stock market indices such as the S&P 500 are “cap-weighted”, meaning you participate more and more in the likes of Apple, Tesla, Amazon, Microsoft, Facebook, and other “winners” as they rise in price.  So, advice?   Stay in the market and stay diversified.   No predictions here!