“At the end of the day, it’s not a normal condition to have interest rates at zero."

I’m sure EVERYONE has “coronavirus news” fatigue by now; hopefully, NO ONE has coronavirus!  As we drift slowly towards a “new normal” there will be ample opportunity to discuss the impact on investing and sort out potential winners and losers.  Let’s “return to our normally scheduled program” on interest rates, a discussion now even more relevant than before we broke away.   A couple of months ago we discussed the long-term downward trend of real interest rates (and by “long-term”, we mean LONG-term, having looked at rates going back 700 years or so). 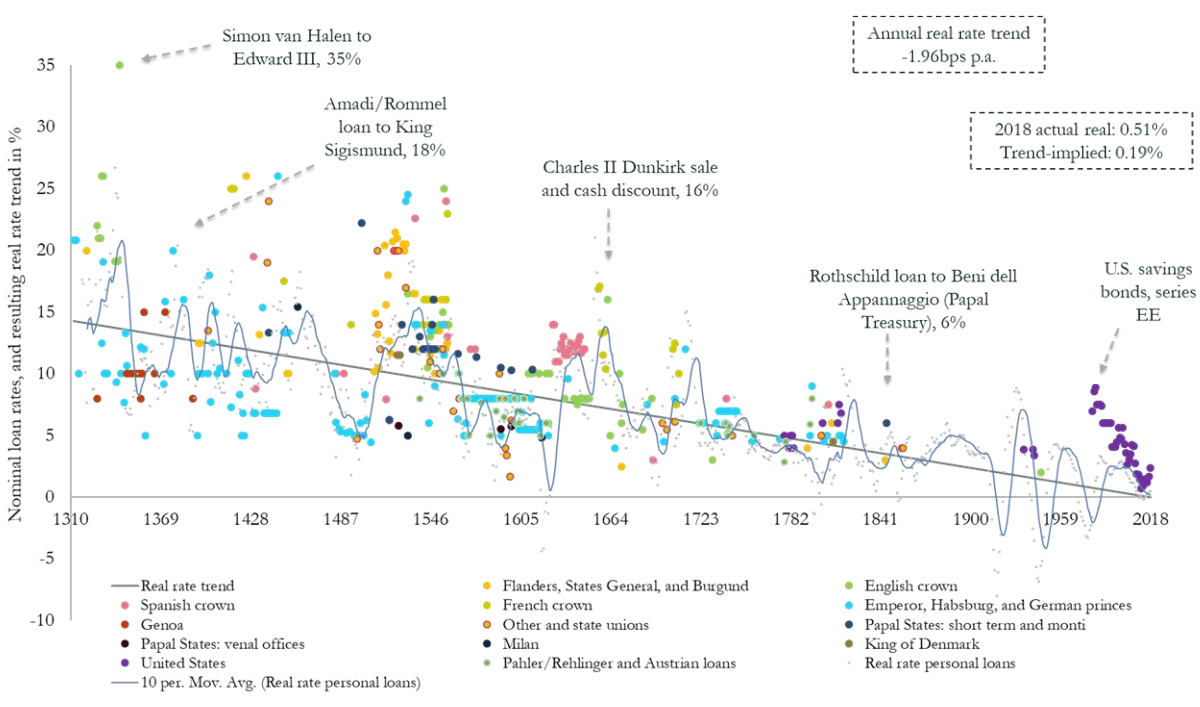 In the past decade we have witnessed a phenomenon unprecedented in history:  negative nominal rates.  There are well-respected economics textbooks on my bookshelves (and those of many others) that flatly declare that negative nominal rates are impossible.  Real rates could be negative if inflation is greater than the nominal rate (rates of 2% with inflation of 3%, for example), but no one (so the theory went) would invest 100 to get only 99 back – the underside of my mattress yields 0% after all!  Yet negative nominal rates have become the norm in Europe and have been exhibited in the Treasury Bill market here in the U.S. on several occasions over the past 12 years, including just this spring.  How is this possible?

First of all, banks are legally required to keep a certain amount of reserves with the central bank (the Federal Reserve in the U.S. and the ECB in Europe, for example).  The central bank can make short-term rates negative and banks are “forced” to deposit at those rates.  But market conditions can also drive rates below zero.  If I sell $10,000 worth of stock in my brokerage account, I deposit the proceeds in my bank.  FDIC insurance in the U.S. guarantees my account value up to $250,000, so my money is safe – or I could just take the cash and hold it.  If Texas Teachers Retirement Fund sells $1 billion of stock, they cannot risk depositing the proceeds in a bank, and that’s too much cash to physically hold.  This became eminently clear when Lehman Brothers and Bear Stearns both went under in 2008.  So they buy (default risk-free) government bonds (usually short-term T-Bills) instead.   There is nothing to prevent bidding for these securities to push the price today above the par value at maturity, leading to a “negative” rate – Texas Teachers’ puts the billion in 90-day T-bills which might be worth only $998,000,000 at maturity (a minus 0.8% interest rate).   For example, on December 9, 2009, three-month U.S. Treasury Bill rates turned negative for the first time as investors looking to park cash bid those bills up over par (meaning their notional value at maturity was less than the price paid). 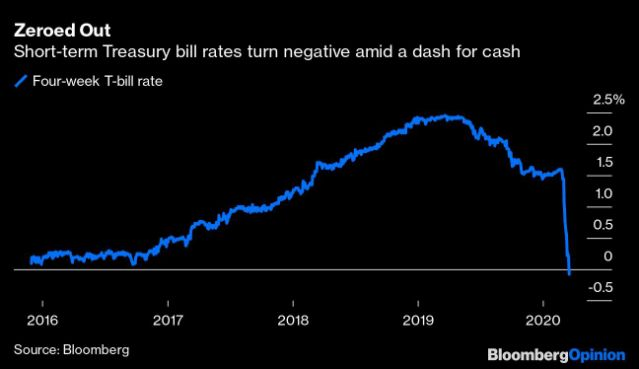 How extreme can this situation get?  We know that nominal rates can soar; T-bills yielded over 20% in 1981, but can they go that much negative?  It would seem not, though it seems unwise to say “never” in this environment.  If rates become ever more negative, a dichotomy would likely develop in the marketplace.  Individuals and other small investors would resort to the “mattress bank”, holding cash and other substitutes such as gold and other precious metals in lieu of bank deposits.  At some point, even large financial institutions would seek alternatives and financial engineers would likely step in to provide them.  This is what happened in reverse in the early 1980s.  At that time, interest rates paid on savings deposits at banks and Savings & Loans were restricted by Reg Q (embodied in the Glass-Steagall Act of 1933) to around 3%.  With T-bills yielding 20%, brokers created the first mass money-market accounts to allow ordinary savers easier access to these higher yielding instruments.  How low the negative floor where all this begins in earnest is hard to fathom, but we suspect that minus 3 or 4 percent would be enough to trigger it.

Central banks could continue to force banks to hold reserves at negative rates, but at minus 3 or 4 percent the losses (to banks) would be onerous as their ability to pass such rates on evaporated as depositors sought out alternatives.  At such rates, some consumers might turn to holding cash, but that raises security risks and governments might move to ban cash (the restricting of denomination size, such as the recent move by the European Union to ban 500 euro notes, is a move in that direction), making holding large sums in cash impractical (the underworld already has this problem!). 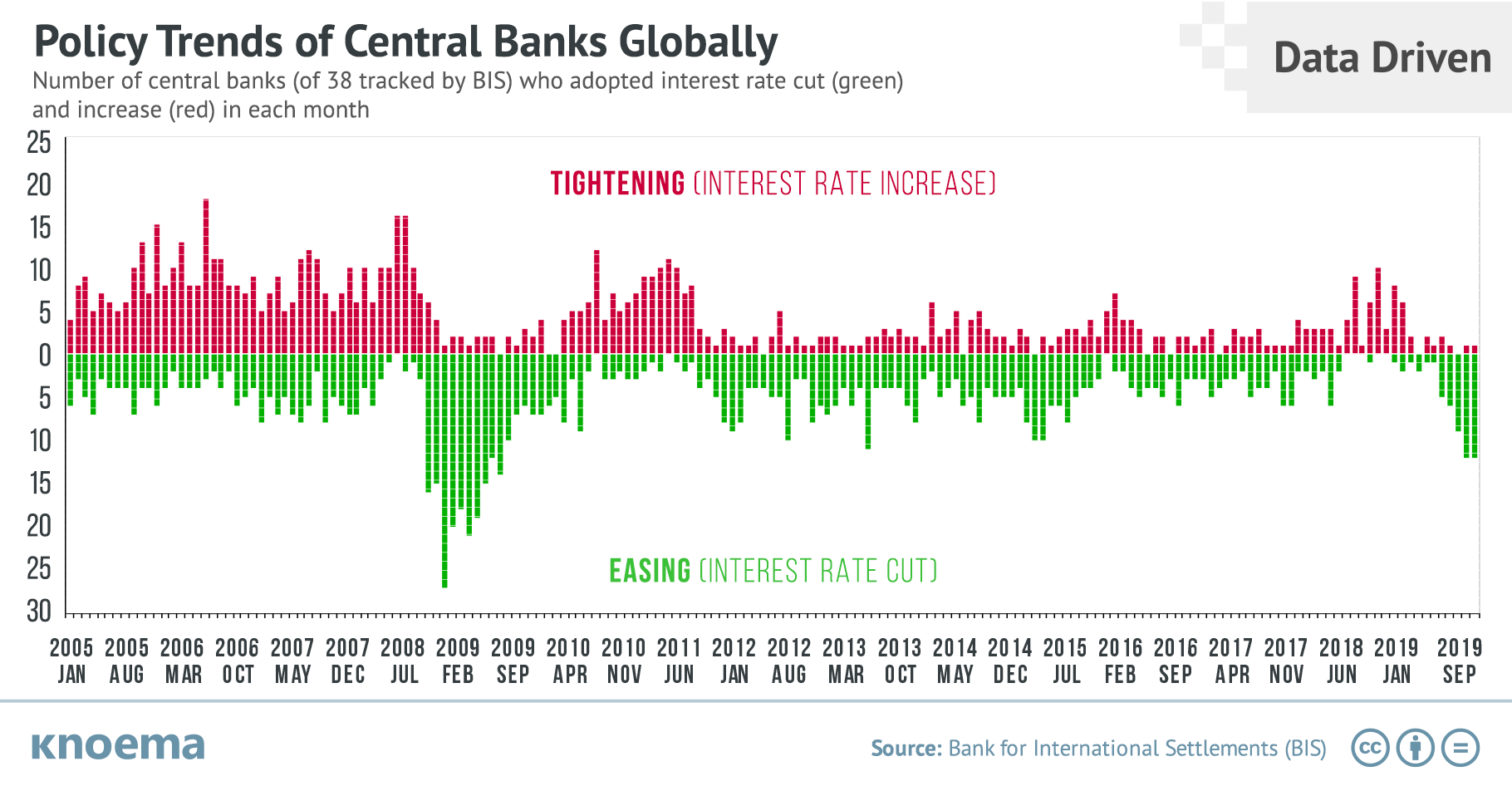 So how might all this play out?  Considering our discussion last month about the very long trend of decreasing rates, we might settle into a world of essentially zero rates.  Banks would no longer make money by “borrowing low” and “lending high” and “borrowing short” and “lending long” (playing the normally upward-sloping yield curve).  They would be reduced to providing payment services and other transfer functions, and banks as we have traditionally come to understand them might not exist.   People (and institutions) will store money (“save”) in a never-ending supply of zero-yielding government bonds.   We are pretty near that state now!   Mr. Blankfein’s view might soon be viewed as quaint, rooted in a lost world order like those of so many colonialists who lamented the disintegration of the once seemingly eternal British Empire.