“Capitalism is the worst form of economic system, except for all the others!”

Economics is the most fundamental social human activity.   From the earliest hominid hunter-gather tribes to our 21st century civilization, every human group and society has had to grapple with how to distribute the fruits of human labors and determine how to satisfy everyone’s needs and wants.  For almost all of history resources were mostly controlled (usually through the application and continued threat of force) by an extremely small royal and aristocratic class who lived in relative luxury while almost everyone else lived at or near a sustenance level of existence.   Unfortunately, many in the world today still live under such a model, which goes by many names … communism, dictatorship, oligarchy, kingdom, and socialism among them – but all share the elemental characteristic that the distribution of resources is controlled by a few “elites”.  Over the past 100 years the latter (socialism) has been billed as the nirvana of economic systems and has been touted in many highly-educated circles and institutions.  It is hard to believe that 30 years after the fall of the Iron Curtain, it is again fashionable in many quarters, including the United States.  That its various incarnations in the 20th century led directly to over 100 million deaths seems lost on many.  [See David Satter’s piece in the November 6, 2017 edition of the Wall Street Journal for a detailed accounting.]. 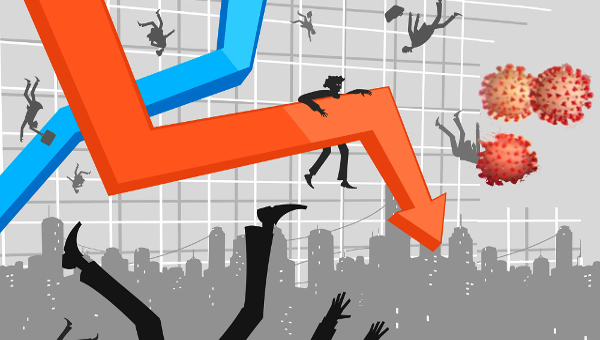 I have been familiar with the arguments presented herein since my long-ago excellent undergraduate education in economics, but I recently saw a graph that shockingly crystallized a lifetime of words and ideas into a single image.  Indeed, a picture tells a thousand words!  For five millennia until about 1790, global GDP barely nudged upward along with population growth, leaving wealth per capita at a stagnant few dollars per person in current terms.  Of course, a (very!) few lived sumptuously – witness the grandeur of the Palace of Versailles, for but one example.  Then, as they say in the movies, a miracle occurred.  That “miracle” was no divine intervention – it was capitalism!   Starting around 1790 world GDP exploded and, despite adding 6 billion or so people to the human population, per capita wealth has also increased exponentially.

Look at the following amazing graph of global GDP over the past 2000 years: 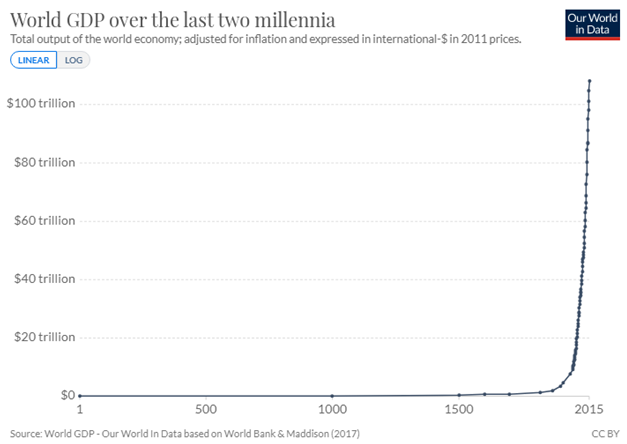 What happened?  Did people in 1790 suddenly get smarter than their forebears?  Plato wrote The Republic around 375 B.C. and Euclid wrote The Elements (establishing the axioms and theorems of plane geometry) around the turn of the 3rd century B.C.   Shakespeare’s works were all done by the early 1600s.  Did people get more industrious?  Notre Dame Cathedral in Paris was completed in 1345 (without CAD-CAM programs, cranes, steel rebar, concrete, and other modern conveniences of construction) -- and then there are The Pyramids at Giza (circa 2500 B.C.). 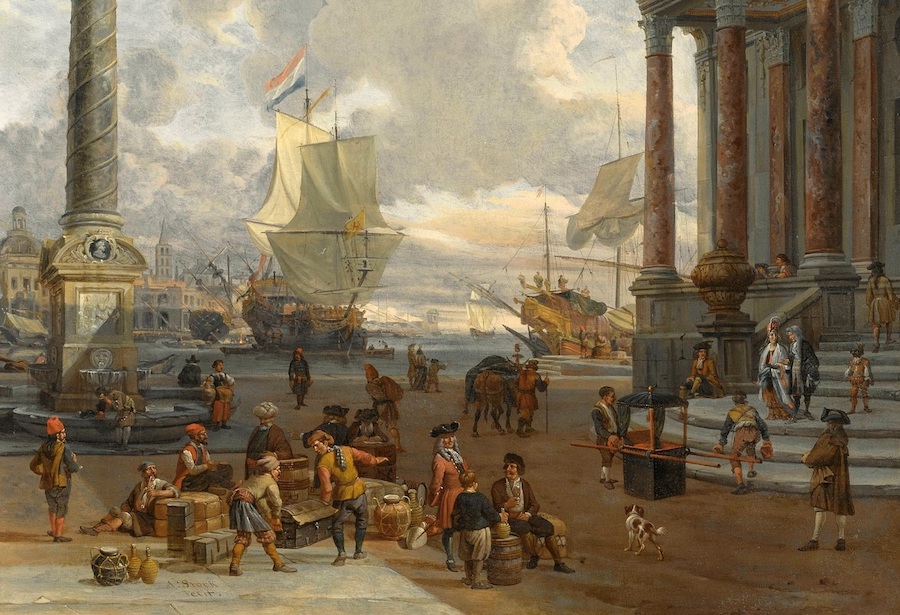 No!  Overnight people did not get smarter, work harder, or become more clever – they became free.  The United States of America became the first nation on earth where the relationship between the people and their government was one of citizen to elected officials, not subject to king of some sort, and the principles of Adam Smith’s recently published The Wealth of Nations (1776), which described a new way to let economic activity evolve, were put into practice.  The resulting release of human ingenuity and the diaspora of this economic model has produced a truly staggering number of inventions and developments in every field imaginable and, on historical terms, at a dizzying pace. 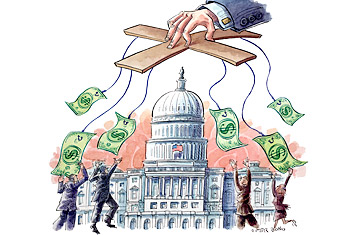 All this is not to say we live in an economic utopia.  Uncomfortable wealth disparities still exist, but they are far less than in ancient and medieval times and we have far more means to remedy them today than then.   Progress has been uneven for different groups and races too.  But that is not a fundamental problem of capitalism, but rather a political problem rooted in deep historical biases.  Remedying these won’t be made easier by making all of us poorer.   And solving problems such climate change and pandemic threats will require more wealth and new technologies and innovations, not less. 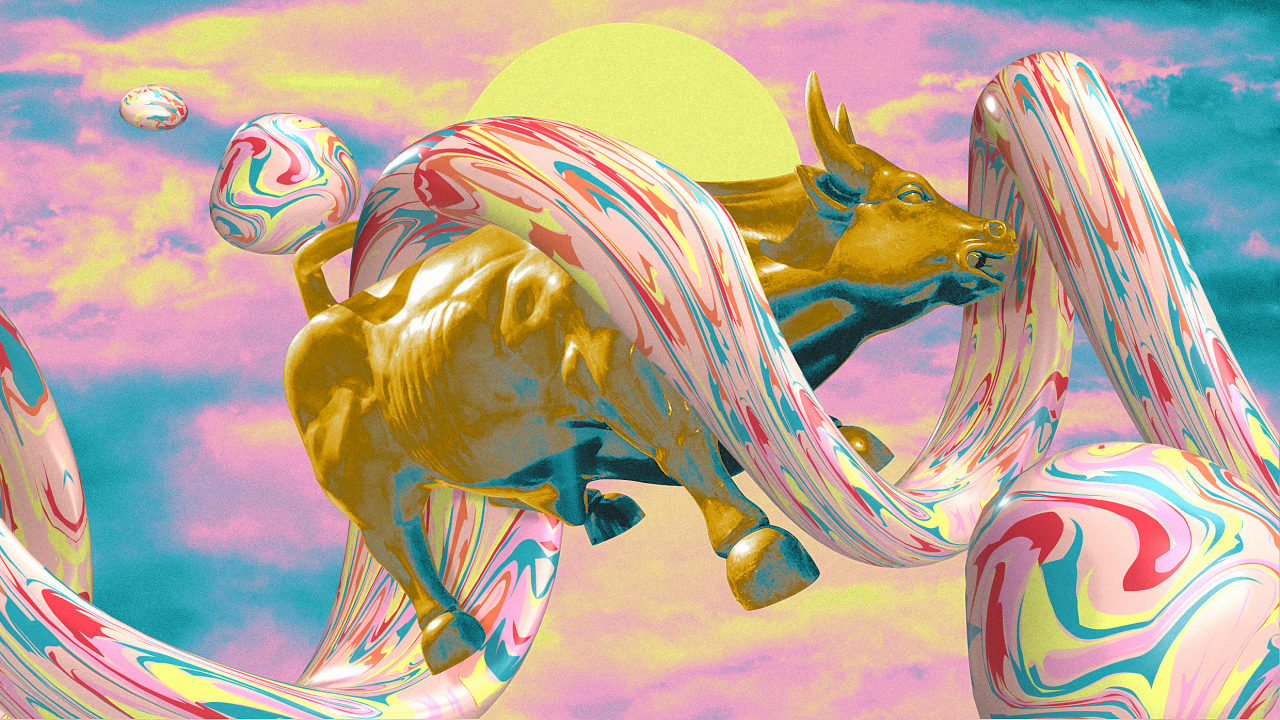 The “peak” of the graph above occurred around 1970, whence capitalism has been in decline.  A small, barely detectable, flattening at the top of the graph reflects this.  And   since then, per capital growth in income has stagnated and global income inequality has increased.  Our way to a better future for all mankind is to ride the engine that climbed the path above.  We need to spread that idea more globally, not restrict it, and look to solutions to societal problems within its framework, not discard it in favor (even a little) of an outmoded model that “flattens” our progress.  The picture couldn’t be clearer!

[Note:  in a subsequent piece, we will address some of the “failures” of capitalism, both real and perceived, and discuss how the problems can be fixed within the system and don’t’ warrant “throwing out the baby with the bathwater”.]